On the 5th December 2017, President Andrzej Duda, giving a speech to members of parliament and the senate of the National Assembly, has inaugurated celebrations of the hundredth anniversary of Polish independence.

The celebrations will be a great and sublime event in the life of our nation; it will consist of many ceremonies, international, central and local, bringing to memory both those historical moments, which are connected to the birth of the Polish nation, as well as those which decided of maintaining its independence.

In the celebrations of the centenary particularly fits in a heroic, soldier legend of general Stanisław Maczek, which begins at dawn of fights for independence of the Polish nation in 1914 and ends with his death 11 December 1994, year after Russian army withdrew from Poland. END_OF_DOCUMENT_TOKEN_TO_BE_REPLACED 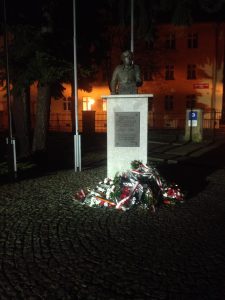 On the 11th of December 2017 in Żagań took place an official ceremony of unveiling the board dedicated to Lieutenant-General Stanisław Maczek.

What is more – a decision was taken to organize a Great Rally of general Maczek Fans in 2020 in Żagań! END_OF_DOCUMENT_TOKEN_TO_BE_REPLACED