Every year, on the second Sunday of September, at the War Cemetery in Aldegem/Maldegem is celebrated the anniversary of liberating this town and the neighbouring towns by the 1st Polish Armoured Division and the 4th Canadian Armoured Division.

From 2018, as part of the program „Liberation Route of the 1st Armoured Division of General Maczek”, celebrations at the cemetery will be preceded by a two day (8-9 September) „World General Maczek Fan Jamboree” organized in the Canada-Poland Museum Park in Adegem. 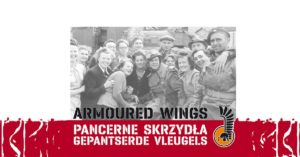 “(…) international exhibition “Armoured Wings” presenting the liberation of Flanders by the 1st Armoured Division in September 1944. Trilingual texts (Polish, English and Dutch version) are illustrated with a lot of photos and films that have never been published before. Panels are accompanied by unique exhibits including standards, soldiers’ diaries and soldiers’ diaries.”