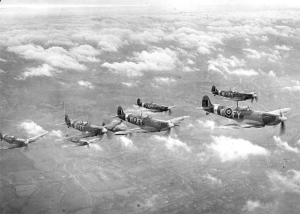 It used to happen extremely rare for the General to be woken up twice. The adjutant, with hesitation, made risky decision of full insubordination. A smile of happiness and contentment, brightening the face of his boss in deep sleep, hold him from invading into pleasant world in which the Commander of the 1st Polish Armoured Division  apparently was now enjoying himself. The adjutant silently closed the door…

It used to happen extremely rare for the General to be woken up twice. The adjutant, with hesitation, made risky decision of full insubordination. A smile of happiness and contentment, brightening the face of his boss in deep sleep, hold him from invading into pleasant world in which the Commander of the 1st Polish Armoured Division  apparently was now enjoying himself. The adjutant silently closed the door…

General Maczek had really good reasons, after so many years of fighting for the “others freedom’”, and not for “ours one”, to look with confidence into near future and let himself be convinced by the truthfulness of his favorite maxim “Fortuna variabilis – Deus mirabilis”;

3 MAY AFTERNOON, finally, the long awaited confidential message eventually arrived; Chief of Staff of Marshal Montgomery, informed the General from his HQ in Bad Zwischenahn that in two days Germans would surrender Wilhelmshaven and Jever fortresses without further fighting. Therefore it is the Marshal’s permission for the 1st Armoured Division to be relieved from the planned final assaults and start moving to Lübeck and further – to Poland.

Gen. Maczek immediately appoints special small battle groups to take capitulation from these cities 20 km away which the division was to capture next day: under  command of Colonel Grudziński for Wilhelmshaven and under command of Colonel Skibiński for Jever.

MAY 3 EVENING Another long time awaited signal arrives, this time from the  Chief of Staff of the Commander-in-Chief of Polish Armed Force in the West, General Kopańsk. He reports from London that on that day in the morning, in Spandau on the Havel River (Berlin), at the junction of the front of the 9th American Army with the 1st Polish “Peoples” Army (14th Regiment of the 6th “Pomerania” Infantry Division a long-held, meticulously kept secret meeting of General Michał Żymierski, Minister of Defense of the Provisional Government of the Republic of Poland and the Supreme Commander of the “People’s” Polish Army ), with General Władysław Anders, acting as Supreme Commander of the Polish Armed Forces in the West took place.

Gen. Żymierski (Commander of the 2nd Infantry Brigade of Legions in the Bolshevik War in 1920 and a co-student of Gen. Anders at the College of War in Paris (1921-23), placed himself at the disposal of the President of the Republic of Poland Władysław Raczkiewicz and of the Commander-in-Chief, General Anders.

General Anders left with General Żymierski his current command of the 1st and 2nd Polish “Peoples” Armies and ordered him to lead to the eastern side of Elbe River the troops of the 2nd Polish Corps, loyal to Polish Government in London which after liberating Bologna (Italy) on 21st April 1945, moved northward and now were staying alongside the 1st, 3rd and 9th American Armies. Anders also made Żymierski obliged for the safe transfer of these troops to Warsaw and preventing them from possible attacks by Russians.

Gen. Żymierski has also accepted the task of bringing the troops of the 1st and 2nd Polish “Peoples” Army who were fighting in the Berlin front,  back to the eastern side of Odra and Nysa Łużycka, and to establish and man the new Polish border posts from Czechoslovakia borderline to Świnoujście / Peenemunde on the Baltic Sea.

Both generals agreed to start these activities after the order is issued by the President of the Republic of Poland (London) Władysław Raczkiewicz, which will probably take place on May 8, 1945, after the official signing surrender of all German forces in Berlin.

MAY 5TH AFTERNOON – Polish 1st Armoured Division reaches Lübeck, where efficient, fast loading of tanks, equipment and soldiers takes place onto the transport and landing ships provided by Royal Navy and requisitioned by the Allies in the ports of Lübeck, Wismar and Neustadt in Holstein.

MAY 6, the ships depart for Gdynia, with almost full armour stuff of the  Division on board, assisted by Polish and British warships, with German pilots in the navigation bridges forced to lead the convoy through the mined waters. In the air, the cover of the fighters of Polish squadrons: 306 “Toruński” and 317 “Vilnius”.

MAY 7  convoy of ships reaches Gdynia; columns of tanks and other divisional military vehicles set off to Warsaw, assisted by the military police of the 4th Reserve Cavalry Regiment of the Polish Army, who were instructed to look after them by General Żymierski. Polish “Spitfires” are flying over Polish “Shermans”.

The extraordinary enthusiasm and euphoria of the people of passing Polish cities and villages remind soldiers of General Maczek touching greetings of residents of the towns liberated by them in France, Belgium and the Netherlands.

MAY 7, at the headquarters of the Commander-in-Chief of the Allied Expeditionary Forces of General Dwight Eisenhower in Reims (France), the Act of Unconditional Capitulation of the Third Reich is being signed in the presence – as witnesses – of the Chief of Staff of the Commander-in-Chief of the Polish Armed Forces General Stanisław Kopański (friend of General Maczek) and commander of the French Army corps general François Sevez.

MAY 7 AT NIGHT, paratroopers of the Polish 1st Independent Parachute Brigade under the command of General Sosabowski is being dropped into Warsaw, assisted by fighters of Polish squadrons: 306 “Toruński” and 317 “Vilnius”.

The commander of the Warsaw Military District (WOW) places himself and his subordinate units at the disposal of General Sosabowski. Parachute Brigade’s and WOW soldiers establish joint outposts on the city’s tolls.

MAY 8 BEFORE NOON, the leading columns of tanks of the 1st Armoured Division reach Warsaw, enthusiastically welcomed by Warsavians and residents of other cities, who came specifically to the capital for meeting them.

MAY 8 AFTERNOON at the Okęcie airport in Warsaw the “Lancasters” of the Polish 300 Bomber Squadron “Ziemia Mazowiecka” are landing with the President of the Republic of Poland Władysław Raczkiewicz, Prime Minister Arciszewski and members of the Polish government in London as well as with Chief Commander of the Polish Navy Vice Admiral Jerzy Świrski and the Polish Air Force gen. Mateusz Iżycki.

MAY 8, EVENING – under growing public and media pressure, especially after the Joint Public Appeal of the highest commanders of the Allied land, air and navy forces, and after the resolution of the British House of Commons and of the delegates of states to the would-be United Nation Organisation in San Francisco, US President Harry Truman and Prime Minister of Great Britain Winston Churchill send Marshal Stalin an official note.

The note states that:

“due to the unilateral recognition by the USSR on April 21, 1945 – contrary to the protocol signed in Yalta – the Provisional Government of the Republic of Poland, the United States and Great Britain feel exempt from the Jalta agreement related to the establishment of a new Polish government, and furthermore  they will continue to recognize the current Polish government in London, whose armed forces have fought against Germany in the joint front of the Allied Forces since the beginning of the war, i.e. from September 1, 1939, until the day the capitulation of the Third Reich. **

For this reason, a representative of the Polish Armed Forces in the West was invited by both powers – similarly to the representative of France – to participate on May 7, 1945 in Reims, in the act of signing the document on the surrender of the Third Reich, by Admiral Karl Dönitz in front of the Supreme Allied Expeditionary Commander Armed Forces General Dwight Eisenhower.

At the same time – as agreed in Yalta – the United States and Great Britain recognize the Oder and West Neisse lines as the western border of Poland and accept, initiated by the USSR, immediate positioning the Polish armed forces along this border.

The governments of the United States and Great Britain were informed by the Polish government that on May 8, 1945, this border was crossed by troops of the 2nd Polish Corps loyal to Polish Government in London along with units of the 3rd American Army of general George Patton which had been invited by the Polish government to do so. American troops will remain on Polish territory as long as Poland considers it necessary.

MAY 8 AT 23.30 Polish Radio broadcast the news about the United States and Great Britain statement and about the entering of American troops to Polish territory, as well as about the signing in Berlin of the final Act of German Capitulation, with the participation of representatives of France and Poland as witnesses. On the Polish side, the document was signed General Tadeusz Bór-Komorowski, the Supreme Commander of the Polish Armed Forces, released at the end of April from German captivity.

In Belweder Palace, general Kopański, sitting next to General Maczek, pats him on the shoulder: “You were right, Stas: Deus mirabilis, fortuna variabilis!

But it seems, that the clap was a little bit too hard, as General Maczek wakes up… His adjutant touches gently his boss’s shoulder once more: “Sir, it’s time to get up …”

Historical and tourist guide “Liberation Route of the 1st Armoured Division of General Maczek” – the popular Michelin format (also in the mobile version).

Presentation of about 200 cities – liberated or conquered – by a division in France, Belgium, the Netherlands and Germany. With a description of the battles and photos of monuments and other memorials in these places, directions, addresses of hotels etc.

If you think you would be interested in purchasing this guide send us a message via Facebook or email.