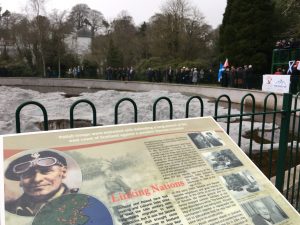 On the 12th of April 2018 at the Mercure Barony Castle Hotel in Eddleston (Scotland) took place a new (after renovation) unveiling of the Great Polish Map of Scotland, whose originator years ago was Jan Tomasik, ex-soldier of general Maczek. Tomasik in 1968 bought Barony Castle, and already in 1975 cartographer Kazimierz Trafas began his works over this magnificent map. Preparations and construction of the Great Polish Map of Scotland were bacznie observed by General Maczek, who after the war was employed in this hotel.

In the celebration of unveiling of the Map of Gen. Maczek participated sisters Malina and Maria Samborska, as delegates of the Memorial Foundation Supporting Culture and Art of President Ryszard Kaczorowski, which realizes the program Liberation Route of the 1st Armoured Division of gen. Maczek.

Thanks to remarkably kind support of Izabela Brodzińska, President of the Scottish Polish Cultural Association, Malina and Maria had the occasion to pass on the information about the program to many persons present at the ceremony, such as General Consul Ireneusz Truszkowski, Profesor Robert Ostrycharz – one of the patrons of the project of monument-bench of gen. Maczek (General Stanislaw Maczek Memorial Trust.)