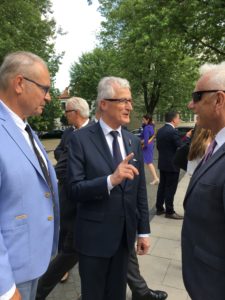 Geert Bourgeois, President-Minister of Flanders speech at the opening of the Armoured Wings / Pancerne skrzydła ehxibition dedicated to the Liberating Route of the 1st Armoured Division of General Maczek in Warsaw on 4th June 2018:

“(…) In some Flemish municipalities, the troops of General Maczek were the first allies whom they saw. And they were very enthusiastically received. Sometimes a romantic spark struck. A number of Flemish girls married a Polish soldier…”