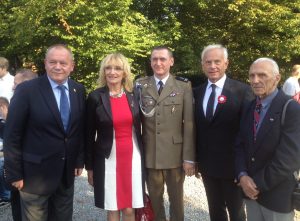 On the 24th of September 2017 in Lommel (Belgium) took place yearly celebrations with the participation of the representative of Belgian King, Ambassador of Poland in Belgium and Mayor of Lommel. The event commemorated 257 Polish soldiers who died in battle liberating Lommel and nearby towns.

About 300 people participated in the religious service and the ceremony on the Polish Cemetery, including representatives of Polish embassy and consulate, Institute of National Remembrance, Office for War Veterans and Victims of Oppression, delegations of Belgian and Polonia organizations, Polish schools from Belgium, Netherlands, France and Germany, as well as orchestra and honorary troop of Belgian Army and the flagship fellowship of the 10th Memorial Brigade of Armoured Cavalry from Świętoszów dedicated to general Maczek. Importantly, one of the last soldiers of Maczek, Mr Włodzimierz Cieszkowski was present at the event. What is more, over 20 people from the Motorcycle Group Moto Poles came all the way from Poland.

Before laying of wreaths and flowers, the participants of the celebration listened to the liturgy and speeches of the representatives of the official institution. A special impression on the assembled was made by the speeches of Mayor of Lommel, Peter Vanvelthoven, ambassador of Poland Artur Orzechowski and soldier of the 1st Division, Mr Włodzimierz Cieszkowski.

(PDF) Letter of the State Secretary of Ministry of Foreign Affairs,