On Saturday, September 8th 2018 afternoon,  the first campers started to erect their tents in the beautiful park of Canada-Poland War Museum in Adegem. They were General Maczek’s fans from Poland, Belgium, Netherlands and France and they came for the First World General Maczek Fan Jamboree. 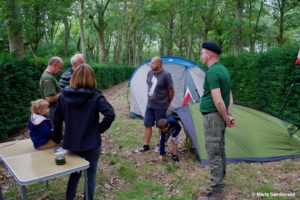 They were welcomed by the organizers: Jerzy Samborski – author and leader of the „Liberation Route of General Maczek’s 1. Polish Division” programme, Maria Samborska – Communication and PR Manager, Barbara Keil Skrobiszewska – vice-president of President Kaczorowski Foundation and the hosts – the owners of the Museum, Gilbert and Alexandra van Landschoot.

The fans were coming single, in pairs and with kids. Most of them represented organizations, which are willing to participate in organizing „Maczek Jamboree” in the next years; among them were: 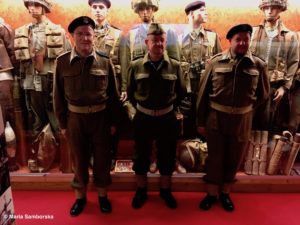 According to the time schedule, participants visited impressive exhibition in Canada-Poland War Museum, having the great Gilbert van Landschoot as a guide. What they enjoyed most, were the unbelievably realistic mannequins of 1st Polish Armored Division soldiers, made with every little detail. Great number of original exhibits, mostly being gifts from the soldiers themselves or from their families, makes the Museum in Adegem the most notable one among institutions which expose the history of the 1st Polish Armored Division.

After dinner in the Museum’s restaurant or at the camp kitchen, participants gathered around the bonfire, situated close to the rocket used to destroy German tanks. The presentation of photos, albums, original journals and notes written by the 1st Polish Armoured Division soldiers, was continued. Philippe Verleyen from Aalter shown the photograph from 1969, from the ceremony of unveiling the monument dedicated to General Maczek’s Division, on which he personally, the little boy, had been handing over the bunch of flowers to General Maczek. Eduard Krykowski, the son of Maczek’s soldier, presented his father’s photo album from 1940-1945 and more other original documents and military decorations. 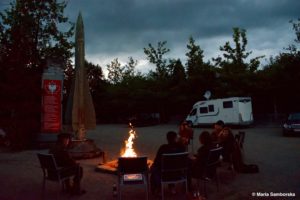 After the dark, Wojtek Romaniak (from the „Antwerpia” Reconstruction Group) took the guitar and started a little music show. Around 11pm, participants left to have a sleep and to „charge the batteries” before the Sunday events…

After breakfast, participants made one group with the owners of the Museum and went together to the Maldegem Military Cemetery to take part in the Commemoration Ceremony organized with the presence of the King or his Representative by the Maldegem municipality every year. 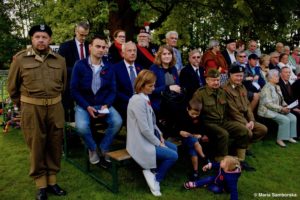 At the Maldegem Military Cemetery gathered a hundreds of people; dozens flags of Belgian ex-combatants organizations and just one flag of Polonia organization –  Polonia-Flandria Catholic Association, being hold by Józef Woś. While the national anthems of Canada, United Kingdom, Poland and Belgium were played it happened for the first time that the words of „Mazurek Dąbrowskiego” (Polish anthem) were loudly sung by the Polish participants so they have been clearly heard and noticed with surprise by the rest of the crowd. 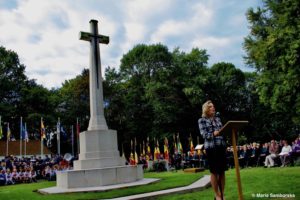 After the flowers were laid at the monument – Polish wreath by Minister Anders and Ambasador – official speeches have been delivered. The speech of Minister Anders – the daughter of another Polish hero, general Władysław Anders – delivered in English with great expression has brought big applause of the public and the tears in the eyes of Polish listeners.

The performances of school pupils followed: among of them was the recitation of Wisława Szymborska’s poem, in Polish and in English. After the imposing ceremony while leaving the Cemetery, General Maczek’s fans promised to themselves to come back next year in the group of hundreds or thousands of their countrymen. 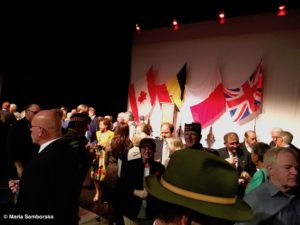 The next event was the reception given by the Mayor of Maldegem, Marleen Van den Bussche in the Maldegem City Hall. Among many guests, we met Representatives of other cities liberated by the Maczek’s 1st Polish Armoured Division, such as Teurneuzen (Netherlands) with its mayor Mr. Jan Lonink.

Lunch and the „Round Table” discussion were the last points on the Jamboree programme with the participation of Minister Anders, Ambassador Orzechowski, Vice-Ambassador Doberszyc-Toulsaly and Mr. Arkadiusz Urban, Advisor to Minister Anders. The Ambassador presented the plans of the Polish Embassy for the year 2019, regarding the 75th anniversary of liberating Flanders and 100th anniversary of Polish-Belgian relations. Jerzy Samborski, organizer of the Jamboree and author and leader of the „Liberation Route of 1st Polish Armoured Division of General Maczek” programme unveiled  his plans of developing the jamboree project in the next future. He proposed of setting up two committees: Honorary Committee to which he invited Minister Anders as a Chairwoman of Honorary Committee and Ambassador Orzechowski in the function of the Vice Chairman responsible for Belgium’s matters; both invitations were accepted. Similar invitations are to be sent to the Polish Ambassadors in France and Netherlands, as well as to others VIPs. 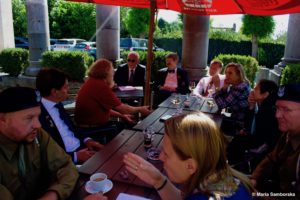 With regards to the Organizing Committee, Jerzy Samborski invited all those attendants of the meeting, who in fact represented „Maczek’s” institutions and organizations, among them Vice-ambassador Doberszyc-Toulsaly, Councillor Urban, Jan Cornellisens (Eerste Poolse Pantserdivisie België), Philippe Verleyen (City of Aalter), Tobiasz Siotor (the great-grandson of Jan Jaworski, Maczek’s soldier), Gilbert van Landschoot (the owner of the Canada-Poland War Museum), Wojciech Romaniak (Reconstruction Group of the Polish 1st Armoured Division „Antwerp”) and Adam Gryczman (General Maczek Motorized Reconstruction Group GRH). Intentionally, the list of the Organising Committee shall be extended with many other members from Poland, France, Belgium, Holland and other countries.